Time to break out your favorite Halloween dog costume. If you’re the creative type, time to design and make your  homemade dog costume from scratch. Yep, it’s that time of year again the leaves are starting to change color (not so much here in Orange County, California), the days are getting shorter, and the evening are getting cooler. It’s that time of year when you and your best pal can dress up like the silliest of doggies or the most serious scary Weredoggie or Frankendoggie. 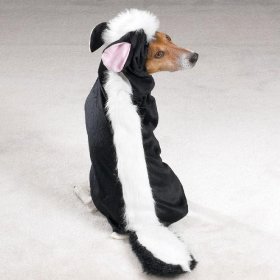 If you’re not into designing your very own dog costume than you can always run to your local Target or Halloween costume store or do as I often do and order through Amazon.com. Check out this little stinker skunk- Dog Halloween Costume

. That would look great on a black dog like Stetson or Linus.

If you’re still having trouble coming up with the perfect dog costume then take inspiration from my post on The 6 Best Costumes On The Internet.

I’ve already started working furiously on Derby’s new dog costume. He’s going to be…well I’m not going to tell you just yet. Let me first finish it up and I’ll put together a post including pictures and all.

For those of you dog lovers out there who love to dress up your pup the Haute Dog Howl’oween Dog Parade is just around the corner.

Here’s a little information on the event: 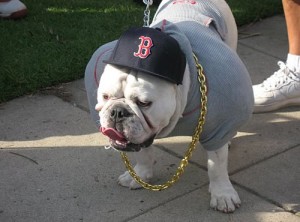 The 10-block sidewalk parade takes place on Second St. between Roycroft and Granada avenues and lasts about an hour.

More than 600 dogs last year helped us to raise more than $10,000. More costumed dogs are expected this year!

All events are free to spectate.

For more information on the Haute Dog Howl’oween Dog Parade visit their website.

Can You Make It To The Dog Costume Parade?

I plan on joining in the fun and festivities of the Dog costume Halloween parade. However, I have many obstacles to overcome. First, I’m captaining my tennis team that weekend and will not know my schedule until after we complete our morning matches. I also have a hockey game that afternoon at 4pm which I will skip in lieu of the Dog costume parade. Other than that…no excuses and I’ll see you there!

Will Derby Be At The Parade In His Dog Costume?

Unfortunately, I’m not sure if this is an appropriate event for Derby. There are two things that concern me about this event. First of all, there might be too much noise and excitement for Derby. After all he’s only 5 months old (closer to 6 months by then). Second, it may not be a good idea to bring him around so many strange dogs. The goal with Derby is to do my best to make sure he does not have a bad experience. This is something I’ll probably discuss with other people from our Orange County GDA group as I’m sure some of them have attended this event in the past.

I hope to make it to the Haute Dog Howl’oween Dog Parade and I hope to see you and your puppies in their best costume.

Did you attend the Haute Dog Howl’oween Dog Parade last year or in the past? I’d love to hear what you thought about this Halloween dog costume parade.