Last week we talked about Linus A Shy Timid Dog and his training. This week we’re going to continue updating you with the things we worked on in training class to help make Linus a more confident dog. Hopefully this will help anyone else out there who’d like to work with their shy, timid, or nervous dog.

A couple things I might mention that may be effecting Linus’s normal behavior is my puppy sitting duties. The past couple days I’ve been puppy sitting two dogs. A 14 week old yellow Labrador Retriever and an 11 year old Miniature Poodle. I wasn’t too concerned because in general Linus gets along with dogs in his own house. 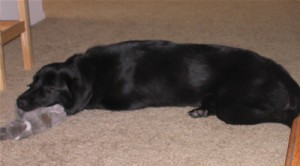 The 14 week old yellow Lab is Ace and is a puppy in training with Guide Dogs of America. Ace came over on Monday and Linus was not immediately thrilled. I could tell Linus was not afraid, but more overwhelmed with Ace’s energy level. After about 5 minutes Linus decided it was time to play and would just knock Ace down as Ace sprinted around the house (he had the zoomies).

I can tell Linus doesn’t like it when Ace barks. I’m not too sure what it is he just kind of looks at me like: “Do we have to have another one of these little puppies?”

Linus is afraid of Quincy the Mini Poo. Quincy only stayed over for a couple days and did not like Ace at all. Ace wanted to sniff Quincy’s butt, but Quincy wanted no part of Ace and just barked or growled at him. As soon as Quincy started growling Linus decided he would just ignore Quincy the entire time he was at our house.

Good thing for Linus Quincy pretty much just ignored him as well.

How To Train A Shy Timid Dog – Week 3

Even with all the distractions of new puppies and older dogs Linus performed quite admirably at week 3 of training. Once again our goal is to try and integrate Linus with the group. He doesn’t seem afraid of the other dogs at all. He seems more concerned with everything else around him including other dogs, basketball players, tennis players, racketball players, bikers, and families walking through the park.

All in all I think it was a successful week. Linus has met some new friends (Ace and Quincy) and hasn’t acted aggressive with either of them (although he is just ignoring Quincy). And during class he’s becoming more a part of the group.

If you have a shy, timid, or nervous dog let me know what actions your taking to try and build your dogs confidence.