Linus is a shy timid dog…quite the opposite of my guide dog puppy in training, Stetson. Now that Stetson is gone we plan on taking Linus to the same guide dog training classes Stetson attended.

Stetson attended six guide dog training classes (each classs was 6 weeks long) during his time with me. It was my goal to get him as much training as possible before we took him in for formal training. The Guide Dog’s of America requirement is that we take our puppy’s to a minimum of two classes: 1 puppy class and 1 basic obedience class. Stetson was an over achiever and attended every scheduled Orange County GDA class while he was a puppy in training.

Linus is not training to be a guide dog…he’s just attending class with the other guide dog puppies in training.

Linus has taken a total of three training classes: 1 puppy class and 2 basic obedience classes. Recently, I have noticed that he will do several things when he see’s other dogs that he doesn’t know.

More recently he’s been barking and lunging at dogs he doesn’t know and I do not like this behavior. I’m not positive what the best steps are for Linus, but 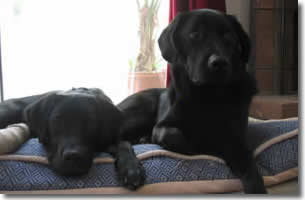 I knew that I needed to get him back into training class where he’d have the chance to interact with well behaved dogs and puppies.

<– Linus is on the right. Stetson has the bandaged foot.

Several months ago we worked on Linus’s behavior and it was told to us that shyness is a hereditary problem and that Linus most likely inherited this from his mother or father. Linus is a shelter dog and we never knew too much about his mother or father, just that his mother was an Australian Shepherd mix, his sister was almost twice as big as Linus, and she was tri-color. I’m not positive, but Linus may have been the runt of the litter…does being the runt have anything to do with being shy and timid? I’m not sure.

Linus started guide dog training class a little over a week ago and has already attended two sessions. Most of the dogs are Labrador Retrievers and are either a guide dog puppy in training or a career changed guide dog. My main goal with this class is to get Linus used to being around other friendly, well-behaved dogs. He already knows his basic obedience.

During the first week of class we mainly stayed along the outside of the class and did all the same training exercises that the other dogs and puppies performed. We (our trainer and me) wanted Linus to be somewhat close to the group, but not to the point where he was uncomfortable. As we progress through the weeks we will move Linus closer and closer to the other dogs in class.

The goal during week 2 was to try and move Linus a little closer to the other dogs and let him get more involved in the exercises.

I’m very pleased with Linus’s progress. During his two training classes he hasn’t shown any aggression towards the other dogs. However, he doesn’t seem completely comfortable. He has definitely shown improvement from week 1 to week 2.

Do you have a shy or timid dog? What do you do to help improve their behavior?