If you’ve been following us since the beginning then you probably remember years ago when we were writing about the best dog friendly cars.  In fact, I just took a look at the archives and came across a few of my early dog car posts.  The first post I wrote was about Finding The Perfect Dog Car published way back on January 9th, 2008!  Unfortunately, I never did find nor purchase the perfect dog car.

However, this trip down memory lane did remind me why I first started looking for the perfect dog friendly car and it all started with a little pup named Linus…

I didn’t have any dogs…

My Honda Accord was over 12 years old…

It was time for a new car!  This was the first time I had money to get pretty much whatever kind of car I wanted!  No one to tell me what I should get.  No restrictions (well kind of) on the amount I should spend.

I was always enamored by the old rotary powered Mazda RX-7 sports cars.  In 2003 Mazda released the RX-8, a rotary powered sports car that was considered a 4 door car because of the novel suicide doors in the back.  I immediately decided this was the car for me and purchased the top of the line RX-8 with sparkling black mica exterior paint and black leather seats.

The Mazda RX-8 Is Not A Dog Friendly Car

The RX-8 was so much fun!  Small and fast, my co-workers called it the Bat Mobile and it did kind of look like the caped crusaders ride.

A couple years after picking up my very own Bat Mobile I decided to adopt a little rescue pup, named Linus.  The RX-8 was a fun car, but a dog car it was not.

When Linus was a puppy I used to take him to my parents house during the day while I went to work then school.  Every day we’d go for a ride in the RX-8 and every day he’d throw up on the leather.  You can really feel the road in the Mazda and while this is cool for a high performance car it was not so nice for a little puppy.  After two weeks Linus got used to the bumpy rides and everything was great until…

Actually the rescuing dogs and fostering puppies wasn’t that big of a deal.  I used my mother’s CRV to transfer the pups and bring them over to the vet’s office, but besides that they mostly just stayed at the house.  I did this for about a year and got by with the RX-8/borrow the CRV combo.  Fostering over a dozen dogs and puppies during that time.

Then one day I decided to raise a guide dog puppy for Guide Dogs of America and that’s when the RX-8 no longer cut it.

Why The RX-8 Is Not A Dog Friendly Car

One dog was okay, but two dogs was a problem.  Here are the issues with the RX-8 and 2 dogs:

If you saw last weeks post about buying a dog car then you probably saw the picture of the parking break.  At least the CRV is over 12 years old.  If Dublin had chewed on the parking break on my RX-8 I might have gone postal!  Thank goodness Dublin uses old cars as chew toys and not new, luxury cars.

Have you had a luxury car or sports car that didn’t work quite so well with your dogs?  Did you have to change over to a more dog friendly vehicle?  Tell us about it in the comment section below.

It’s been a while since we talked about some true mischief, but this week we’re hitting the old mischief archives and bringing up a story about a little guide dog puppy in training named Dublin…

Lets roll back the clocks to mid 2011.  Dublin was not a young pup anymore probably about 13 months and very well-behaved.  He was trustworthy for a 13 month old puppy and at this point we allowed him to lie down on the passenger side floor boards while Stetson did his K9 Nosework Training.  Linus would sit in the back seat and both Linus and Dublin would usually just lie there quietly sometimes watching from the car, but never getting into any mischief until…

Dublin Vs. The CRV

One day Dublin decided he was bored of just lying on the passenger side floor boards.  He wanted some adventure, excitement, or maybe just something to chew on.

Yep, Dublin decided the CRV parking break would make a great doggy chew toy!  Lets just say I was not too pleased with Dublin’s actions.  So what kind of discipline did I perform?  I followed my own puppy training advice and  took a rolled-up newspaper and hit myself over the head as I repeated the phrase, “I FORGOT TO WATCH MY DOG, I FORGOT TO WATCH MY DOG.”

Do You Think About Your Dog Before Buying A Car?

The good news is I don’t own a brand new, luxury car.  The CRV is on it’s last leg and I recently began thinking about a possible replacement car that my dogs and I will both enjoy.  I even visited the Orange County Auto Show not too long ago with Dublin to check out some of the dog friendly cars.  Check out this video of Dublin sitting in some of our favorite dog cars (the first half of the video is our guide dog Halloween party):

I’ve been researching the best dog friendly cars for over 5 years and still haven’t found anything that I really like.  Some of the front runners are the Honda Element, 4 Door Jeep Wrangler, the Nissan Xterra, and the FJ Cruiser.  I’m not thrilled about any of those options and that’s probably why I haven’t pulled the trigger on a purchase.

So what do you think?  Do you think about your dog(s) before buying a car?  What kind of car do you currently drive?  Is it a good dog friendly car?  As a dog owner what are the positives and negatives of your current car?  Please tell me all about your dog car in the comment section below.

I’ve been talking about getting a new dog car for what seems like forever (over two years anyways).  A few months back I went to the Los Angeles Auto Show and came away with a few new ideas for a dog car, but didn’t actually pull the trigger on purchasing a new car.  So I guess I’m going to have to drive around in the 2K Green CRV for another few more months years.

Anyhow here are a few pictures from the show.

My Next Dog Car 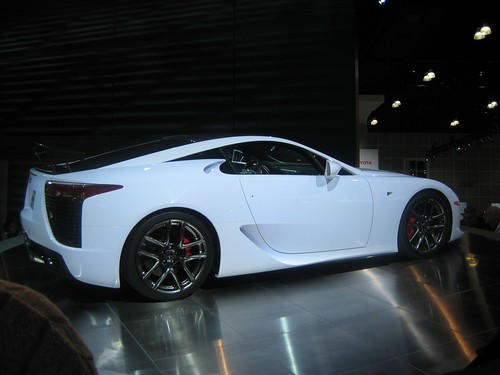 It might get a little cramped in this bad boy with three two oversized dogs.  Also, the price may be a little steep at $350,000 and Lexus is hand picking the people who will be allowed to purchase one of the only 500 cars going into production.  I guess I might have to pass up on the Lexus LFA as my next dog car.

I know what you’re saying…you need a four door car for those dogs of yours.  I hear ya, we’ve also been talking about going green and getting an eco-friendly dog car…something that gets good gas mileage and has minimal impact on the environment.  I give you the Fiskar Karma…What say you? 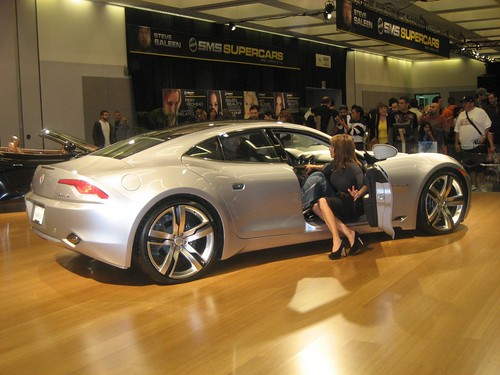 The Karma uses plugin technology along with solar panels to power it’s engine.  It can go up to 50 miles before burning any fuel…and it has 4 doors…perfect for dogs? no?

Okay, maybe this is a little over the top as well and I’m not even sure how much it would cost for this dog car.

Yep, we did talk about the dog friendly Honda Element just before we visited the LA Auto Show and much to our excitement Honda impressed us with their new upgrade to the boxy SUV car minivan wagon. 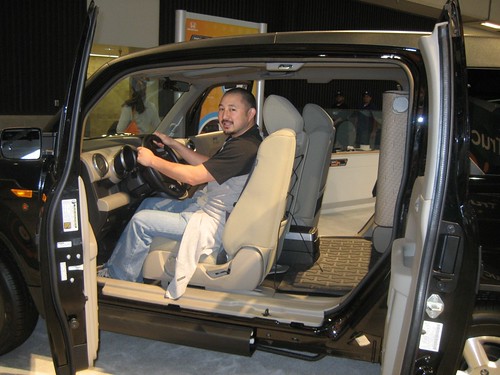 That’s me in the front seat of the Dog Friendly Honda Element.  You can kind of see the rubber mat with bone shaped notches.  Also, the seat covers had doggy designs as well.  You can’t see it in this picture, but there were also climbing latches in the back seat to tether your dog’s leash to the floor. 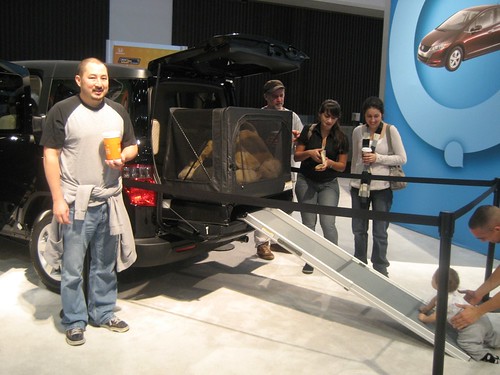 Me again with baby going up the dog ramp.  I’m not sure if it’s a standard sized crate, but it fits nice an snug in the rear storage are of the Honda Element.  You can also see the dog ramp in this picture. 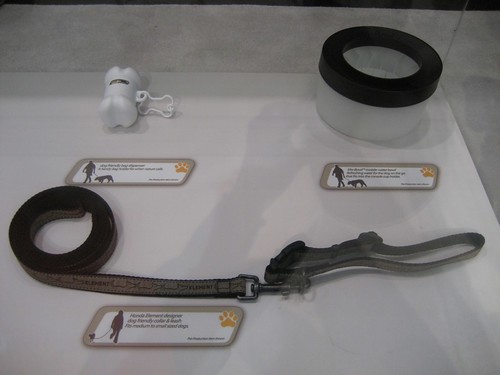 All of this for an additional $995 on top of the regular price for the Honda Element EX.  It’s nice to see that Honda is thinking about us dog owners.  However, I still have two glaring issues that keep me from purchasing a Honda Element.

So now I sit back and wait for Honda to redesign the Honda Element.  Hopefully they will bring the fuel economy up or possibly add a hybrid version to the lineup and remove those awful clamshell doors.

What kind of dog car do you own?  I’d love to hear about it and perhaps you can convince me to trash the old CRV for a new dog friendly vehicle.