It’s been a while since we talked about some true mischief, but this week we’re hitting the old mischief archives and bringing up a story about a little guide dog puppy in training named Dublin…

Lets roll back the clocks to mid 2011.  Dublin was not a young pup anymore probably about 13 months and very well-behaved.  He was trustworthy for a 13 month old puppy and at this point we allowed him to lie down on the passenger side floor boards while Stetson did his K9 Nosework Training.  Linus would sit in the back seat and both Linus and Dublin would usually just lie there quietly sometimes watching from the car, but never getting into any mischief until…

Dublin Vs. The CRV

One day Dublin decided he was bored of just lying on the passenger side floor boards.  He wanted some adventure, excitement, or maybe just something to chew on. 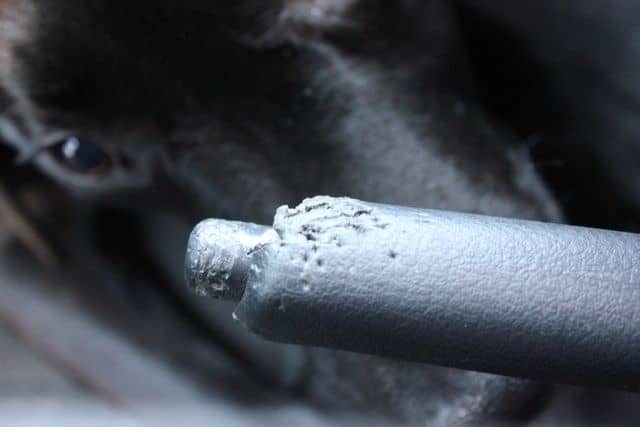 That’s Stetson, but the actual mischief maker here was Dublin!

Yep, Dublin decided the CRV parking break would make a great doggy chew toy!  Lets just say I was not too pleased with Dublin’s actions.  So what kind of discipline did I perform?  I followed my own puppy training advice and  took a rolled-up newspaper and hit myself over the head as I repeated the phrase, “I FORGOT TO WATCH MY DOG, I FORGOT TO WATCH MY DOG.”

Do You Think About Your Dog Before Buying A Car?

The good news is I don’t own a brand new, luxury car.  The CRV is on it’s last leg and I recently began thinking about a possible replacement car that my dogs and I will both enjoy.  I even visited the Orange County Auto Show not too long ago with Dublin to check out some of the dog friendly cars.  Check out this video of Dublin sitting in some of our favorite dog cars (the first half of the video is our guide dog Halloween party):

I’ve been researching the best dog friendly cars for over 5 years and still haven’t found anything that I really like.  Some of the front runners are the Honda Element, 4 Door Jeep Wrangler, the Nissan Xterra, and the FJ Cruiser.  I’m not thrilled about any of those options and that’s probably why I haven’t pulled the trigger on a purchase.

So what do you think?  Do you think about your dog(s) before buying a car?  What kind of car do you currently drive?  Is it a good dog friendly car?  As a dog owner what are the positives and negatives of your current car?  Please tell me all about your dog car in the comment section below.