A couple weeks ago we went to visit my now working guide dog, Dublin and his family in Arizona.  I was super excited to see Dublin for the first time since his graduation a little over a month ago.

I sent an email to Liz (Dublin’s partner) to let her know we’d be in town and she graciously asked if we’d like to stop by to say hello and have BBQ.  YAY!  I was so excited!  In case you’re new here Dublin was my guide dog puppy in training for a year and a half and is now a working guide dog.  We did a series of videos chronicling Dublin’s time as a guide dog puppy.  Check out the videos at Puppy In Training TV.  Here’s one of his puppy pictures: 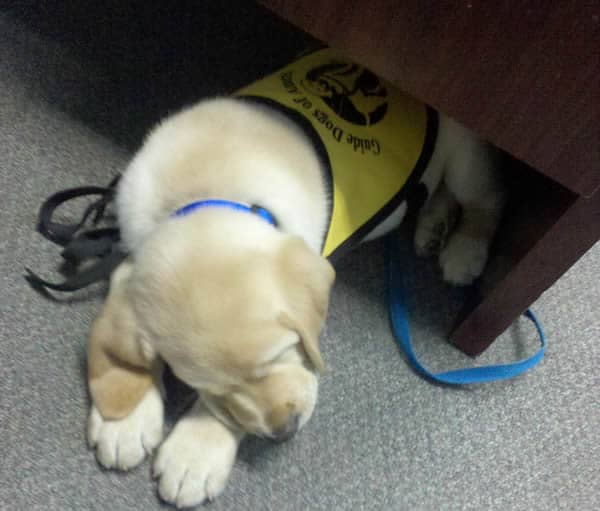 Dublin when he was a guide dog puppy in training...rookie!

We were lucky because the weather was very mild during our trip to Arizona.  Around 90 degrees which isn’t too bad for that time of year.  I lived in Tucson for 6 years and it’s usually well over a hundred in May.  In fact, my graduation from University of Arizona was in mid-May and I recall the temperature hovering around 115 degrees!  My parents thought I was crazy to live in that city.

We were visiting the Grand Canyon State for a hockey tournament (GO KINGS!) and also made a stop to my old college stomping grounds in Tucson, AZ.  We visited old friends and of course the highlight of the trip (for me anyways) was getting to see my little buddy Dublin.

Dublin was doing awesome and looked very good at his new home.  We heard he did very well on his flight from guide dog college back to his home in Arizona.  He was having some stomach problems at school, but that all cleared up when he got home.  I guess college was a little stressful…I’m sure we can all relate to that!

Dublin has a huge backyard (by California standards) with lots of room to run and a nice size swimming pool to keep cool during those blazing hot summers. 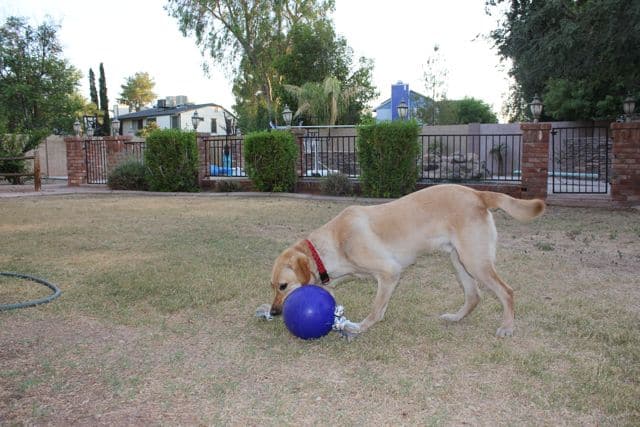 Dublin with his Jolly Ball in his huge new backyard

Liz said that because the ground is so hot in the summer time Dublin wears little booties to keep his paws from getting burnt.  I didn’t get to see them, but I hope to get a video or picture of him wearing booties sometime in the future.

Dublin has a nice little tie down area near the front door of the house with a comfy new dog bed, but Liz says he prefers to sleep on the tile when on tie down…silly boy, but I’m sure it’s nice and cool on the tiles in the summer.  He’ll probably start using his dog bed in the winter. 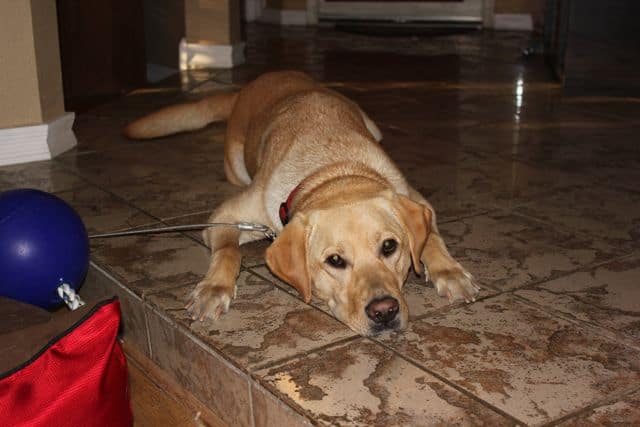 Dublin prefers the tile over his new dog bed

We bought Dublin a new Jolly Ball for his birthday and he absolutely loved it!  Even though he’s a serious guide dog he still acts like a puppy in his new backyard running back and forth playing with his new toy.

It was great to see Dublin in his new environment.  He was very excited to see both me and Ali, but I did notice that he has formed a strong bond with Liz.  When we first came into the house he was extremely excited so Liz left him on tie down.  After he calmed down Liz let him off and he greeted us with plenty of exuberance.  However, after about 5 or so minutes he went over to Liz and stayed by her side.  Not that he stayed by her the entire time, but I definitely could tell that they had already made a very strong connection. 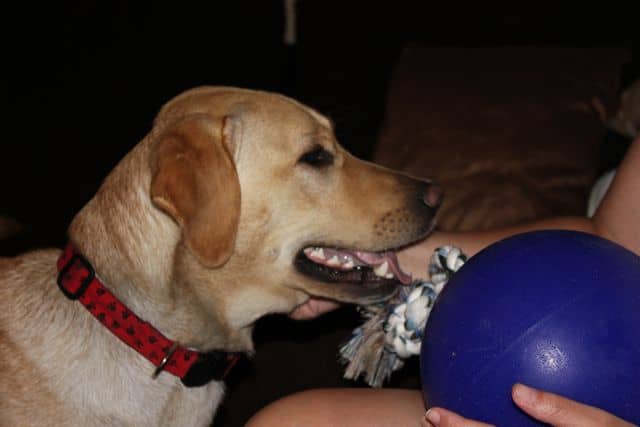 I’m so grateful to Liz and her family for having us over.  Lance made us food on the BBQ and we stayed over for dinner and dessert.  I enjoyed every second talking about Dublin with not only Liz and Lance, but their two young daughters.

Since we’ve been back Dublin took trip to Denver, Colorado.  We heard that he did very well on the plane ride.  Good job Dublin!  We always knew you’d do well on flights after all of our car, bus, and train rides.

Finally, I also hear that the family may be in San Diego sometime this month!  Hopefully it coincides with my schedule and I can drive down to go visit Dublin, Liz, and the rest of the family.

If you want to see Dublin’s puppy videos then check out Puppy In Training TV.

That’s it for now.  Did you raise a working guide dog?  If so, do you hear about his/her adventures?  If yes, please tell us one of his stories in the comment section below.