Before I picked up Linus from the shelter the one thing that stuck in my mind was “Make Sure You House Training Your Puppy!” It really isn’t that difficult. If you’re raising an indoor dog then it is an absolute requirement that your dog be house trained. One thing to remember is every puppy/dog is different. Some will be house trained in a short period of time while others will require more effort. The difference was very noticeable between my two dogs.

This little guy sure looks like he’s concentrating hard. Remember to praise lavishly when your puppy pees or poops outside in their designated spot. 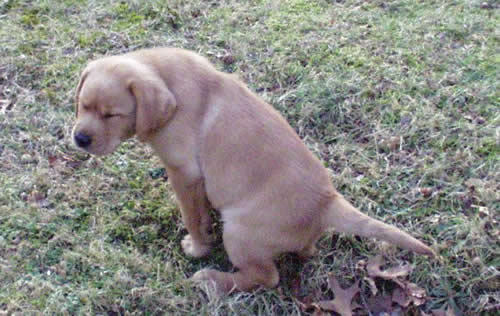 The Basics Of House Training Your Puppy

If you’re raising a guide dog then your puppy should always relieve on leash. It is important to train the puppies to relieve on leash in a variety of surfaces (grass, gravel, cement etc…)

House Training Your Puppy – My Puppies, Stetson And Linus

I picked up Linus from the shelter when he was about 8 weeks old. I wrote the article Dedicated To My Dog Linus chronicling this experience. As I said…at the top of my list was house training my new puppy. I read the Puppies For Dummies book by Sarah Hodgson to help prepare me. I highly recommend Puppies For Dummies for any new puppy owner. It helped me get through that first year with Linus.

Linus was a very easy puppy to raise. His only fault was his hatred for the crate. We’ll get to that another time. As for his house training I’d say he was nearly perfect. He probably had less than 5 accidents in the house. After having him for 1 month (he was only about 12 weeks old at the time) he no longer had accidents in the house.

What was the key to my success with Linus? Keeping a close eye on him and I probably took him out to “Get Busy” at least once an hour during his first few weeks with me. When I couldn’t watch him I put him in his crate. I had pretty much my full trust in him when he was 12 weeks old which is pretty amazing considering some dogs don’t have full bladder control until they’re about 12 weeks old.

Stetson was a different story. I was very confident going in to his house training after having such great success with Linus. In addition, I read the entire Guide Dogs of America puppy raiser training manual twice and re-read Puppies For Dummies. I tried to take Stetson out as often as possible…probably about once every half hour for the first few days. He did okay, but sometimes he was stubborn and wouldn’t “Get Busy” outside then come into the house and immediately pee on the tile. I stopped keeping track of how many accidents he had in the house.

After using the five training steps mentioned above Stetson got better, but I still didn’t have full trust in him. He started warning me when he had to poop by running head first into the sliding glass door. When I’d hear a “Boom!” I knew Stetson had to poop. I just don’t think Stetson had the same kind of bladder control as Linus. When I finally gave him my full trust (he was about 6 months old) he went ahead and surprised me by peeing in the house on the carpet. He did the same thing when he was about 9 months old. I was pretty sure Stetson understood that he wasn’t to go in the house, but he just couldn’t hold it.

At 12 months of age I finally had full trust in Stetson’s house training and he hasn’t let me down. He’s 14 months old now and I can’t remember his last accident (it’s been at least 4 months with an accident-free house).

How Do I Know They Have To Go?

As I said earlier Stetson used to run into the sliding glass door when he was ready to poop. Now he just goes to the front door and paces back and forth until I relieve him. Linus just sits patiently at the front door until I notice him. You can also teach your puppy to ring a bell or scratch the door, but I’ve neglected to do this with my puppies.

What experiences have you had house training your puppy? Tell me your story in the comments area.