I received a great image today in my RSS feed (Check it out below) of a handsome puppy who looks like a purebred Golden Retriever.  However, one distinct feature that might lead one to believe he’s not a purebred is his black spotted tongue.  I have always heard that Chow Chow’s have black tongues and if your dog has a black spotted tongue then he’s probably mixed with a Chow.  The different color tongues I’ve heard of are solid black, blue black, and purple from a spotted tongue to a full black tongue. 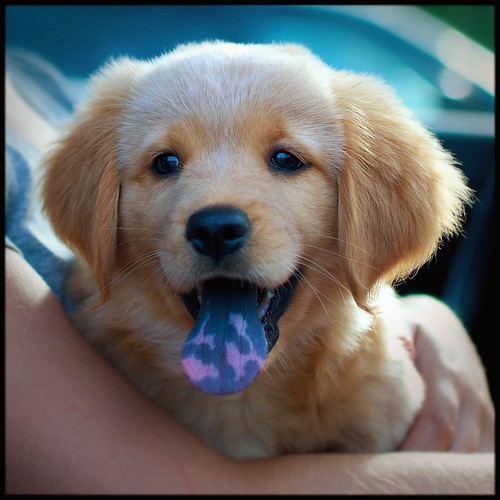 What a face, originally uploaded by Syncharmony.

My dog Linus has a spotted black tongue and until today I’ve always assumed that he must be mixed with a Chow.  Originally we had heard from the shelter that he was primarily an Australian Shepherd with some possible Chow and Labrador Retriever.  He was on the fluffy side when he was younger further leading us to believe that he was part Chow.

After a little internet research today I came across a couple sites that may have the answers to my question.

Can A Purebred Dog Have a Black Tongue?

Well we already know that a purebred Chow Chow has a blue black tongue and I confirmed that at the Wikipedia website.  The Wikipedia site confirms that not all mixed breed dogs with black/blue black/purple spots on there tongue have Chow mixed in with them.  In fact an article on The Great Tongue Debate professes that there are more than thirty pure breeds with members known to have spotted tongues.  Here are some other interesting facts:

From the Great Tongue Debate:

Breeds known to have members with spotted tongues:

Check out the Great Tongue Debate for more information.  They also received a ton of pictures of dogs with black and spotted tongues and have posted to their site.

As a puppy raiser I’m around purebred Labrador Retriever and Golden Retrievers quite often.  I’m going to keep an extra close eye out for Labs with spotted tongues.

How about you?  Do you know a dog with a black/blue black/purple or spotted tongue?  If so, is he a purbred dog?

Top Picks For Our Puppies

This post may contain affiliate links. We may earn money or products from the companies mentioned in this post.There are so many great pictures of…

This post may contain affiliate links. We may earn money or products from the companies mentioned in this post.On November 9th, 2016 Raven gave birth…

This post may contain affiliate links. We may earn money or products from the companies mentioned in this post.Welcome to PROJECT: Service Dog in Training – Chronicling the…

This post may contain affiliate links. We may earn money or products from the companies mentioned in this post.Until just a couple days ago I…

This post may contain affiliate links. We may earn money or products from the companies mentioned in this post.YAY!  It’s Friday!  Time for fun and…

This post may contain affiliate links. We may earn money or products from the companies mentioned in this post.Choosing the perfect name for your dog…