Almost four years ago while browsing Petfinder.com I came across pictures of a couple fluffy Australian Shepherd mix puppies at the Carson shelter in Los Angeles, CA. I had been looking for a puppy for the past month and had my eye on either a Labrador Retriever or a Golden Retriever…Australian Shepherds were also on the radar.

As many of you know I ended up picking up a tiny black puppy and named him Linus. Check out this post I wrote Dedicated To My Dog Linus. 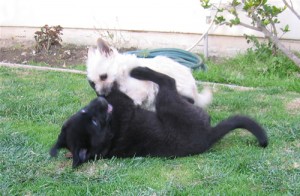 Of course all wasn’t perfect from day 1. In fact, as soon as we arrived at home I asked my girlfriend to grab Linus (he was sleeping in a box) and bring him into the garage. When she went to grab him he was so sound asleep she though he was dead and was trying to figure out how to break it to me. Other complications included stomach infection, worms, anemia, and flea infestation (he had dried up blood all over his ears and head). Linus slept most of the first 3 days he stayed with me. After a visit to the vet, a little cleanup, medication, and lots of love Linus was stumbling around like any other little puppy.

At an early age Linus learned to play well with cats. My sister’s cat Lulu was only a few months older than Linus and both cat and dog grew up together for the first year of their lives. Sometimes Linus would chase Lulu other times Lulu would chase Linus. It was quite the sight watching a cat chase a dog or watch the cat hide in the planters then jump out to ambush the unsuspecting puppy.

Linus was great with cats then came his first interactions with dogs. While it wasn’t an awful experience he learned from my parents dog (we think he’s a Cairn Terrier) Ralphie. Ralphie is very smart, very hyper, very possessive, and undisciplined. The good thing is he only weighs about 12 pounds. Linus also weighed 12 pounds when we brought him home, but he was no match as a puppy for an adult dog. Here’s a video of one of their first play sessions.

As you can see Ralphie is a little rough with poor little Linus. As a result now when Linus plays with Ralphie in the same yard he does exactly the same thing Ralphie would do to him as a puppy.

Now that you’ve seen how Linus learned to play how do you think he treated Stetson and Derby when they first entered the household?

Tomorrow’s article will have some great video of Linus playing with puppy Stetson and puppy Derby.

If you missed yesterday’s first article on inappropriate dog play then check it out here:

What Is Inappropriate Dog Play – Part 1 of 3?

What do you think? Do you have some examples of inappropriate dog play? Let us know in the comments area below.