Not too long ago I mentioned that Stetson was going to start training towards his Canine Good Citizens test. If you haven’t read my article that goes over all 10 tests in the AKC’s Canine Good Citizens Program then click on the CGC link. Here’s a short breakdown of the 10 tests and how Stetson did on each one. The cost of the CGC Test is normally $11, but we got to take the test for $5 because our evaluator didn’t have the CGC tags for our dogs.

Where Did I Think He Went Wrong

The only areas I thought he might have had problems was when he was sniffing at Clover and when he was walking and tracking the moth with his eyes. The leash may have tightened a tiny bit during his walk, but I was pretty confident he was doing fine.

The Results Are In

We need to send in his paperwork along with $5 and the AKC will send us his certificate of completion. 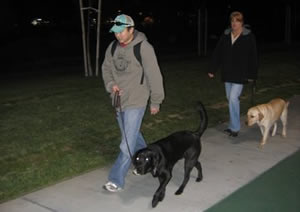 Great job Dustin! I’m sure you’ll do great when you move on to your formal training in Sylmar on February 16th 2008. We’ll see you next week at class.

Dustin already wrote about his experience on his blog. The only time I got worried for Dustin was on come when called…he nearly detoured towards Clover, but Anne got Dustin to straighten out and he reached her successfully. Take a look at Dustin’s blog.

My Hints For the CGC Test

That’s about it. If you’re dog is taking the CGC test anytime soon and you have questions please email me or leave a comment.

Thanks to everyone who helped us prepare Stetson for his CGC training including Ramona, Dustin, Anne, Jim, Virginia, Julia, Bennie, My Mom, Linus, Erin, Charlie, and the Loara freshman basketball team. We couldn’t have done it without your help.

What do you think? Are you ready to pass your Canine Good Citizen Exam?