Does everyone remember Pink the piglet and his dachshund mother Tink? If you haven’t heard it’s the true story of a little piglet named Pink who is adopted by Tink and her litter of Dachshund puppies. You can find all the details about this amazing true story in Johanna Kerby’s book, The Pink Puppy. 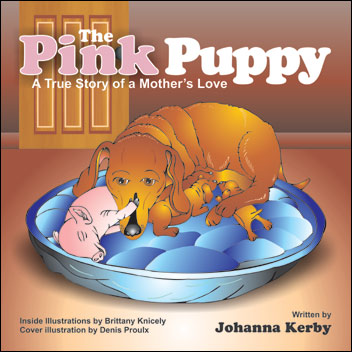 We also documented much of the story right here on the Puppy In Training website including many great pictures of Pink the piglet, Tink the mother Dachshund, and all of Tink’s little Dachshund babies. Here’s a link to all of those stories: Pink And Tink

The Latest News On Pink And Tink

A few people have asked me how Pink and Tink are doing so I went ahead and contacted Johanna to see how the two were doing. She sent me a few pictures and gave me the update on Pink and Tink. Here’s what she had to say:

We are all doing well. The book is selling really well and I have been invited to some schools for author visits and I have had a few book signings, one at our local Borders Store. It has been a lot of fun.

Tink is having a little bit of a medical problem. She has to have a mammary tumor removed and her teeth worked on at the end of this month. I hope the tumor isn’t cancerous. The vet said it was a 50/50 chance. The tumor is very tiny but hard as a rock. She also has to have a hernia repair and get spayed after the first of the year. She is just as sweet as can be and is always happy!

Pink is doing great. We moved him last week to a smaller barn where he can go inside or outside. It was the first time he had ever been allowed to really be a pig. He loved the mud!!! He is usually a very clean guy, but he was covered from head to toe by the end of the day. I loved watching him experience it. He ran and ran. He needs the exercise!!! He is getting very chubby. He is short and wide…about 150lbs now. He should be well over 300lbs and a lot taller. He is very sweet and loves to eat marshmallows. We have trained him to “sit” like a dog for a marshmallow treat. We can get him to do it about half the time.

When we put him outside, we put a litter of piglets in there with him for company. He had never been with another pig before and it was also interesting to watch him interact with them. They are about 75lbs at 2.5 months old. He chased them around and by the end of the day he was like a mother hen with chicks following him around. He is the boss of the pen! They won’t be there for long, but I thought it would be a good experience for him.

I am sending you a few pictures of them and I will get you some more later. Tell your readers thanks for the inquiries and they can email me anytime at tinkandpink [at] msn [dot] com

And here are the latest photos: 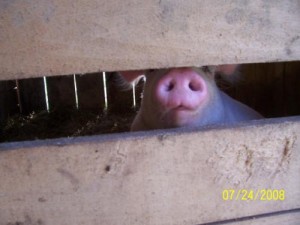 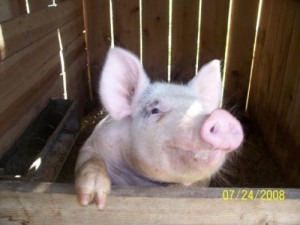 Pink With Marshmellow Slobbers On His Chin 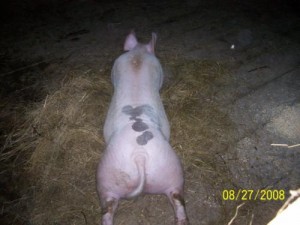 Pink In His Favorite Position 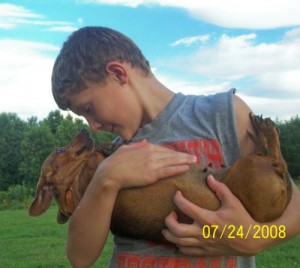 Well, all I have to say as that Pink sure has grown since those early days. If you want to see the photos of Pink when he was just a tiny Piglet take a look at look at these: Pink The Piglet. Thanks Johanna for the update on Pink and Tink. Hopefully everything goes okay for Tink and her visit to the vet.