Halloween dog costumes have become quite the rage for the enthusiastic dog owner. Just a few years ago I wouldn’t have dreamed of dressing my own dogs up, but since I started volunteering with Guide Dogs of America I’ve become more involved with my own dogs and learned that there are benefits to dressing up your dog besides just letting your dog ham it up or get a good laugh or scare from your friends and family.

Why Dress Up In Halloween Dog Costumes?

Dressing your dog in a Halloween costume allows you to handle many parts of your dog including head, feet, torso, tail in ways you may never have before. This is important as a blind handler will use his sense of touch to handle his dog in many different ways. As a guide dog puppy raiser it’s important to get your dog used to being handled in as many different ways as possible including having them dressed up in Halloween dog costumes. Halloween dog costumes allow you to pull legs through arm holes, pull a t-shirt over head, or put those silly socks on your dogs paws.

A few weeks back I put up the post Halloween Dog Costume Parade Coming Soon!. I was very excited to go to this Halloween dog costume event in downtown Long Beach, but unfortunately I had a conflict in my schedule and instead I was part of charity event (we raised a little bit of money for Guide Dogs of America) all weekend. Fortunately for me I got our roving reporter to go to the event and snap some photos and write up a little report on the excitement yesterday at the Haute Dog Howl’oween Parade 2008.

Without further adieu here’s our report from the Haute Dog Howl’oween Parade 2008:

I attended the Haute Dog Howl’oween Parade in Belmont Shore (Long Beach) yesterday and had a great time! After reading on their website that over 600 dogs participated in the parade last year, I anticipated this year would be about the same. I didn’t actually count the number of costumed doggies but I think the parade lasted about two hours. That’s a lot of dogs!

After finally finding street parking, my friend, her little Westie and I got to Livingston Park around 2:15 p.m. The energy there was off the charts. There were many vendors, adoption booths, dogs, their owners, and numerous spectators. Because the parade was set to start at 2:30, we decided to head straight to the parade route and would have to come back to the park later.

The main part of the parade route was along the north and south sides of 2nd Street (between Roycroft Ave. and Granada Ave). Now if you’re familiar with 2nd Street then you know that it’s a congested street as it is, but add a special event and there’s not much walking space on the sidewalks. But I think all this only added to the excitement! We found ourselves sitting curbside on the south side of 2nd Street where it was shaded.

As dressed up dogs and their owners passed us, my friend and I found ourselves laughing, squealing, and in complete amazement. Dog owners truly showcased their artistic ability and creativity and their dogs showed great patience. With the heat from the sun, from wearing their costumes, and too much stimulation, many dogs grew tired along the parade route. Some owners opted to stop midway through the parade due to their dogs’ exhaustion.

Here are some of my favorite costumes: 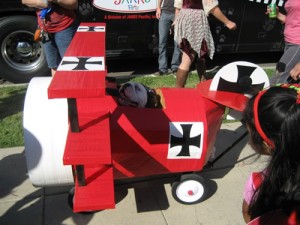 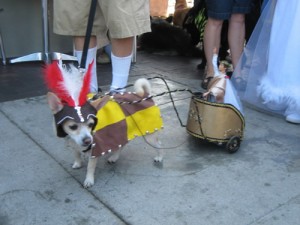 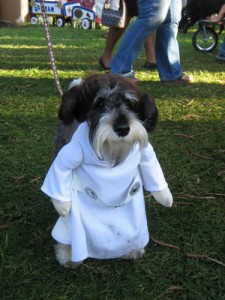 My most favorite costume of all: Flasher pug! – I like the little pug arms! – Colby 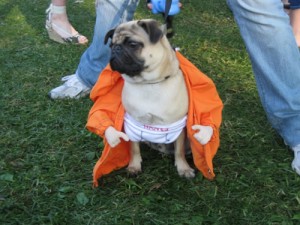 Once the parade was over, we headed back to Livingston Park to see what the vendors and adoption booths had to offer. There were various vendors selling doggie clothing, doggie costumes, leashes and collars, and treats. I was hoping to buy some doggie toys but was disappointed that none could be found. We missed the bulldog kissing booth that was held before the parade, but the Bobbing for Howl’oweenies booth was still open. Here Yuki, my friend’s Westie, took a look in the containers but wasn’t sure what to do. 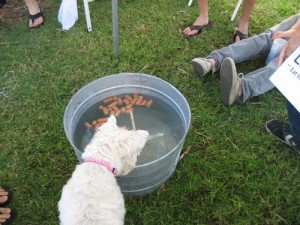 Overall, the Haute Dog Howl’oween Parade was well organized and a very successful event. If you love dogs in costume, I highly recommend you attend next year.

Hopefully I can make it to the 2009 Halloween Dog Costume parade! Until then I’ll just have to live vicariously through pictures, friends, and family (my mom and sister were there too!).

Did you attend or participate in the parade? Your thoughts?

If you’d like to see more Halloween dog costumes check out some of my favorite costumes at: The 6 Best Dog Costumes On The Internet.