Yesterday I was driving home from work when I saw a dog stick his head out the car window.  It was a beautiful Golden Retriever wearing a gentle leader, sniffing the air, and in general just enjoying the car ride.  I pulled out my handy dandy new DROID Phone and snapped a few pictures while waiting at the stop light. 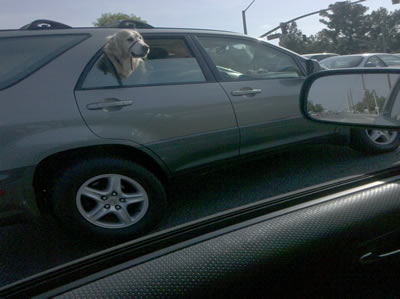 I wanted to start off by saying it can be very dangerous to let your dog hang his head out the car window.  There’s all kinds of debris scattered on the road and it often kicks up from the cars in front.  Just take a look at my windshield (several nicks) or the front of my car (chipped paint and minor dents).

Now just think about your dog hanging his head out the car window getting pelted in the eye by a tiny rock at 50 mph.  I don’t even want to think about the vet bill let alone the pain and suffering your dog would endure if he caught a pebble in the eye.  I’ve never used them before, but I’ve heard that some people have their dogs wear Doggles when they hang their head out the window of a moving car. 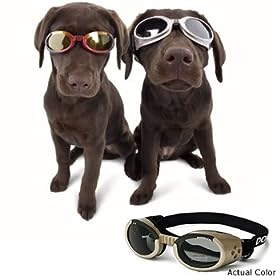 A friend of mine used to let his dog hang her head out the window until one day his collie mix jumped out the car window at 30 mph.  Lucky for him there was no oncoming traffic and his dog didn’t get injured on her fall to the ground.

Also, if your dog has allergies like mine then all the pollen and dust flying into your dog’s face could cause an allergic reaction.

As a child my parents never let me stick my head out the window.  The few times I tried I seem to recall receiving a quick smack to the butt.  I’ll crack the window for my dogs and they’ll put their nose about against the window, but I never let my dogs put their entire heads out the car window.

Now that I got my safety speech out of the way we can get to our list of Top 5 Reasons Why A Dog Sticks His Head Out The Car Window. Lets do it David Letterman style and begin with a countdown.  Drum roll please……….

NUMBER 5 – It helps them to cool off faster inside a hot car.

NUMBER 4 – So they can pretend like they’re running at an incredible rate (see the movie Dumb and Dumber).

NUMBER 3 – To make sure you’re driving safely on the road.

NUMBER 2 – This is a sure sign that you stink!  Your dog is obviously trying to avoid your stench.

NUMBER 1 – They love to sniff the air…

Of course just like the David Letterman list the Number 1 answer is always anti-climatic although in today’s case it’s probably the closest to the truth.  It’s my understanding from what I’ve heard from friends and family, read in books and on the internet, and observed, dogs have such a keen sense of smell that being able to put their noses entire heads out the car window is like a natural high.  They get to catch many different smells passing through the air and because the car is moving so fast these smells are constantly changing.  I guess it might be similar to watching some beautiful scenery pass by.