Me: What’s wrong?
Her: Linus has a big chunk of fur missing from his back and it’s slimy and bloody.
Her: I think Adelle took a bite out of her…
Me: Actually, I think it might be a hot spot…

Although I didn’t know too much about hot spots I’ve seen them on some of the other Guide Dog puppies in our group. Pups usually chew and chew on one spot until there’s no fur, it gets irritated red and bloody, and usually looks kinda slimy.  The good news was besides the hot spot Linus was acting totally normal playing with Adelle and running around the yard, jumping on the couch, etc.  If he had been lethargic or acting out of the ordinary I would have rushed him to the emergency vet.

I never noticed Linus excessive licking or chewing on his butt/back area so this is something that came up very suddenly.  Although I think it would have healed up on it’s own I wanted to make sure it wasn’t:

Getting Rid Of Hot Spots On Dogs

That’s my buddy Linus with a hot spot on his butt.  This is actually about 4 days after I started applying his medication and giving antibiotics.  The scabs are almost healed.  Before we visited the vet you couldn’t really see the bald area because the longer top coat was matting against the wound. 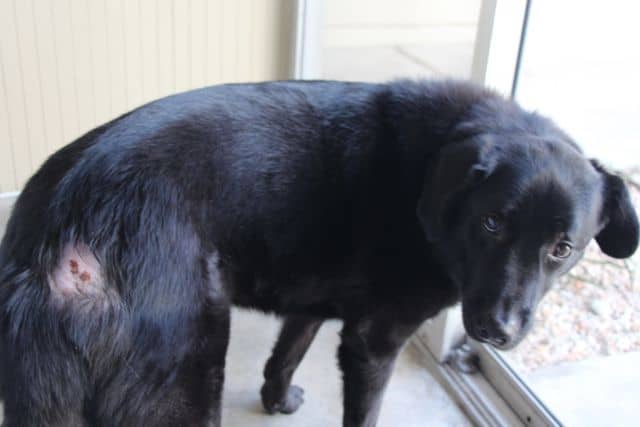 By the way, I just saw my friends Siberian Husky who had a hot spot 6 months ago and his fur still hasn’t fully grown back.  It actually looks like it’s going to take my friends dog at least a year before his coat returns to normal.

Self diagnosis is not always the best form of treatment.  Although we have this wonderful resource called the internet the best thing to do is to consult a professional veterinarian if there’s anything wrong with your dog.  Based on my experience seeing other dogs I was fairly sure this was nothing more than a hot spot I still really didn’t know anything about hot spots and this was a perfect time to learn a little bit about what caused these nasty irritations.  So we took a trip to the Vet and $120 dollars later here’s what I found out.

Our vet told us that a hot spot was more of a generic term that referred to an area that got irritated by some type of allergy.  In Linus’ case he thinks based on the location (on his butt/back area) of the hot spot it was more than likely caused by a flea bite.

At the time Linus’ fur was matted down against the scab so our vet recommended cleaning up so here’s how we treated the hot spot:

It’s funny we used Otomax on Stetson’s ears so I was wondering what it actually was and why it was also applicable for hot spots.  Here’s a little information on Otomax:

Who is it for?

What are the benefits?

I guess it works for infections on the skin as well.  Whatever it is it works because it’s been just under a week and everything is almost all healed up except for the bald spot on Linus’ butt!  We’ll keep treating and hope for the best.  The vet said his fur will eventually grow back.  I hope so because that bald spot is blinding it’s so bright or maybe it’s just the contrast with the dark fur.  Who would have thought that black furred dogs have such white skin.

One last thing we started up was getting Linus and Stetson back on their flea meds.  We’ve been using Advantage II, but we’re not huge fans of the topical meds so we’re going to do a little research and see what might be a better alternative.

How about you guys?  Have any of you experienced hot spots on your dogs?

We’ll probably have a few posts about flea meds, but for starters let us know what flea medications you use and why?