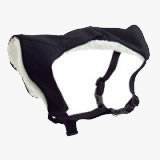 During my search to find a car suitable for my two dogs I began to think about some of the products I own that help keep my dogs safe in the car. Several years ago I purchased the Four Paws Safety Seat Vest Harness

for my dog Linus. Linus is a very calm dog and for the most part just sits in the back or front seat of the car while I drive. This makes it very easy for me to drive even if he doesn’t have any sort of safety device on. However there are plenty of reasons you should consider a safety harness or some other device that keeps your dog in his seat.

The Dangers Of Driving With Your Dog

This information comes from a UK Pet Club website:

…RAC Foundation showed nearly 90% of all pet-owning motorists had been distracted by their animal when driving, and a further 11% had almost crashed into the car in front because they were too busy attending to their furry friends to look at the road… …Even pets that are normally well behaved could be frightened by something unusual and dive for the driver’s feet or lap… So what’s the best way to keep you and your pet safe in the car?

As I said earlier Linus is a very calm dog, but he is easily startled and would jump up to the front seat or my lap when he’s scared. Before I considered securing Linus in a harness he would usually stay in place riding in the front passenger seat. However, as a puppy he vomited on several occasions on my upholstery. Also, as mentioned you shouldn’t let your dog ride in the front seat if you have passenger side airbags. Just like with children a dog can be seriously injured by the airbag.

Guide Dog Puppies in Training need to get very accustomed to riding in the car. Stetson alway rides on the passenger side floorboards when we are driving (if he’s with a passenger he stays on the floorboards between the passengers legs). As a puppy I had to secure Stetson to the floorboards by trapping his leash inside the closed car door. I would do this by putting a knot in his leash then closing the passenger door on the knot. After about a month he became accustomed to the floorboards and would just stay down on his own during all of our car rides. The other option I have with Stetson is to let him ride in a crate while driving. I’ve only done this one time since I’ve had Stetson and that was because I had several dogs riding in my car.

There are plenty of safety devices out there to secure your dog during car rides. Some I’ve used and some I have not.

Barriers – Barriers will keep your dog from coming to the front seat of your car, but still may not protect them from an accident or keep them secure and under control.

Linus wears his harness in the backseat of my car. Just put on the harness, loop the seatbelt through the back of the harness, and snap the seatbelt into place. That’s it! Now you have the peace of mind that your dog will not try to sit on your lap while your driving, jump out the window, or bounce of the windshield in an accident. 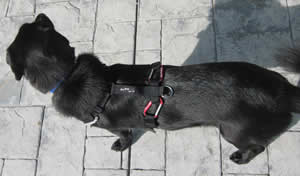 The picture on the left is Linus wearing the Four Paws Safety Seat Vest Harness. You can’t see the harness very well because of Linus’s black fur. You can see the red replacement Climbers Safety Spring Hooks I used in place of the regular clips.

Overall I think this is a great product and something you should consider using if you take your dog on car rides. It’s very important to keep yourself and your dog safe whenever you go out for a drive.

Let me know what you think. What do you do with your dog? Do you secure him during car rides?