What Is Big Black Dog Syndrome?

As mentioned earlier Big Black Dog Syndrome is basically the fact that big black dogs get euthanized at a much higher rate then other dogs.

There are many ideas and theories as to why black dogs don’t get adopted as easily:

Which Labrador Retriever would you choose?

Stetson and his siblings – from left to right Stetson, Stuart, Salem, and Sukie.

Linus is more of a medium sized dog at 55 pounds, but he’s tall and lean and therefore looks a little bigger then he really is.

I wasn’t sure what kind of dog I was going to get when I picked up Linus from the shelter, but the color of his fur was just one minor detail amongst the different criteria I planned on using to choose my next pet. Before choosing Linus I visited several breeders and had my eye on one particular chunky little yellow Labrador Retriever we visited out in Riverside, CA. 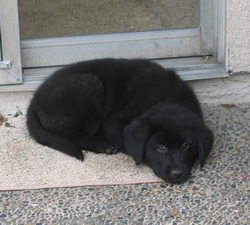 However, a few days after putting a deposit down on the little yellow lab I saw pictures of a couple puppies at animal shelter in Carson, CA. The puppies were mixed Australian Shepherds and in the picture one had a the tri-color look (black, tan, and white) and the other was solid black with a small white spot on his chest.

When we saw the two puppies I remember commenting on how beautiful the tri-color puppy was and was instantly taken by her beautiful coat. However, I still was intent on testing personality over looks (isn’t that what we always do when starting a relationship). After putting both puppies through several personality tests I thought both dogs passed with flying colors, but I was leaning towards the solid black puppy versus the tri-color. In the end I ended up taking home the solid black puppy and named him Linus. While I was much more attracted to the tri-color coat I ultimately (and now happily) went with the dog I thought matched my personality best.

I guess Linus wasn’t a big puppy, but I knew he was going to be a medium to large dog. If you plan on getting a dog take a good look at the black dogs as well as the other colored dogs. A black dog can be just as good a pet as a golden, white, tri-color, blue merle, and any other color you can think of.

Have you heard of black dog syndrome? Do you have a black dog and why did you choose him or her?