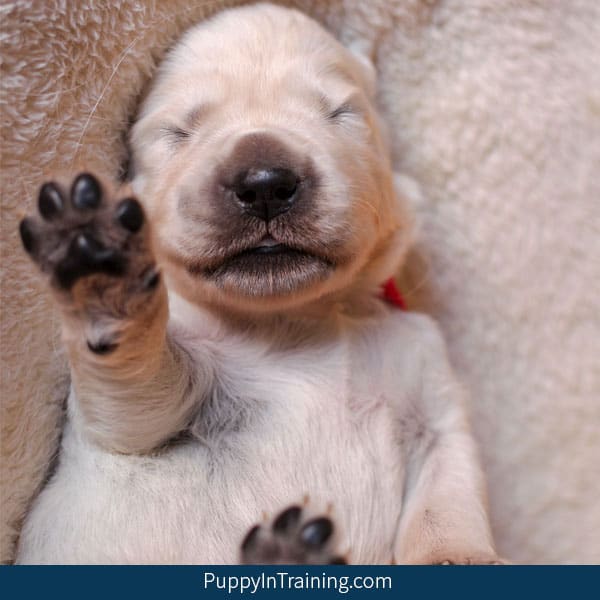 Newborn Puppy – When should you take him to the Vet?

This is my second year with a litter of Golden Retriever puppies and I still have a lot of questions like “when do you take a newborn puppy to the vet?”

Seriously! It’s sometimes difficult to detect when a newborn puppy is sick.

Last year we whelped our first litter of puppies and everything went swimmingly!

Well, there was one snag in the road. Raven got mastitis…TWICE!! (does that count as two snags?) But, the puppies did great the entire 8 weeks they spent with me!

This is our story about when we took our newborn puppy to the vet. We are not experts. If you have concerns about your pets or puppies please contact your veterinarian.

QUICK TIP: If your puppy is sick or not nursing properly you may need to bottle feed your puppy. Make sure you’re prepared and have formula, a bottle, and a nipple for the bottle. When Falken got sick we used this PetAg Nursing Kit and Esbilac Puppy Milk Replacer. By the way, don’t tell my wife…we tried using Emma’s little bottle, but I think the nipple was too big for poor little Professor Falken.

When Do You Take A Newborn Puppy To The Vet?

First of all, this was Raven’s second litter and we felt slightly more prepared this time around.

We even put together a whelping checklist and got all of our supplies before the big day.

Raven started delivering her babies while we were asleep.

That morning we woke up to the sound of crying puppies.

We rushed Raven and her new pups to the whelping box and helped her deliver her last five puppies for a total of eight.

Everything went great! All the puppies were doing well and everything was right in the world.

Since these little buggers were born I started doing daily exercises individually with each puppy to prep them for life and hopefully service dog work.

One of these simple exercises was weighing each puppy daily. We want to make sure that each puppy is gaining weight.

Everyone was doing great from Day 1 – Day 9.

On Day 10 I noticed that one of the puppies was not gaining weight.

Here’s a look at his chart comparing Falken to our smallest puppy, Pippin and our largest puppy, Crane:

It’s easy to look back and see that the trend had probably started a couple days before I noticed the problem on Day 10.

Falken was only gaining 1 oz or less from Day 6 meanwhile our little girl, Pippin was slowly catching up and eventually passing Falken on Day 9.

…And Crane! He’s a bruiser outweighing Falken by over a 1 pound by Day 13.

QUICK TIP: When you have a litter it’s uber important to weigh your puppies daily. We bought this baby scale specifically for the puppies (we’ve also used it with Emma and the twins) If we weren’t weighing these pups daily I probably wouldn’t have noticed Falken falling behind until it was too late.

When Is It Time To Visit The Vet?

I observed our little puppy’s behavior and besides not gaining weight he seemed active and was an enthusiastic eater.

The one thing I did notice was a yellow discharge around the puppy’s butt (I think that’s the technical term) and hind legs.

I proceeded to contact the breeder who’s obviously very knowledgeable on newborn puppies.

She mentioned a couple possibilities including cleft palate or a bacterial infection.

I was advised to get formula to supplement Falken’s feeding. As mentioned earlier we got PetAg Nursing Kit and Esbilac Puppy Milk Replacer.

She also asked if I could administer Sub Q fluids and also if I had antibiotics.

Unfortunately, I did not know how to give Sub Q fluids nor did I have antibiotics on hand.

I kept a close eye on Falken and late on Day 12 he seemed more lethargic and did not want to eat when the rest of the litter was having their feast.

I was worried and remembered that our breeder told me that puppies health can deteriorate very fast. 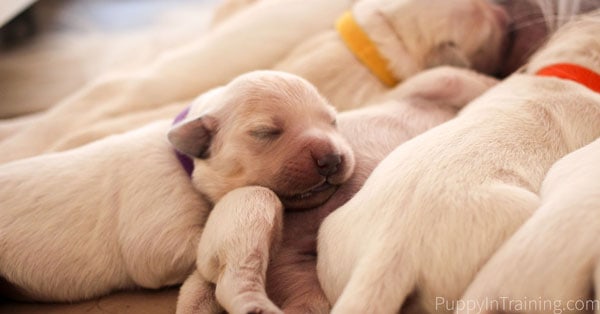 One of our Newborn Golden pups, Pippin taking a break from feeding time.

So I made the decision that evening to rush Falken to our Emergency Vet to see if they could diagnose his ailment and bring him back to health.

Falken received Sub Q fluids and antibiotics from our Emergency Vet, but she said there wasn’t too much more she could do.

She advised me to keep Falken hydrated by making sure he was feeding regularly.

It was also very important that when he did eat he got first dibs on Raven’s teat. We wanted to ensure that Falken was getting all he could eat.

Before leaving the Emergency Vet I was shown how to tube feed Falken which was terrifying to me considering if I accidentally ran the tube down his trachea I could potentially drown him…YIKES!

I got home with little Falken at around 2am and immediately gave him a chance to eat.

The Sub Q fluids and antibiotics must have kicked in because he latched right on and started suckling like…a little piggy!

In the days that followed I always gave Falken first chance with Raven before the other puppies.

He continued to thrive and he gained weight faster then all the other pups. Here’s a look at his chart from Day 13 – Day 18.

* The blue highlight was Falken’s weigh in (same weight as the 3 previous days) less than 10 hours after we got home from the vet.

As you can see since getting home from the vet Falken is back on track and then some.

Way to go little Falken! He’s still the smallest, but his energy seems very good and I think he’s all the way back to normal.

I know it’s not uncommon to lose a puppy in a litter, but I am so grateful for the help I received from our Emergency Vet and the advice I got from our Breeder, and of course for our little fighting pup, Falken for battling back.

We did get Esbilac Puppy Milk Replacer for Falken and did a little bit of supplementing to try and help him get stronger. He really didn’t drink much (if any) and since he was gaining weight daily we weren’t too concerned.

There are often unforeseen expenses when raising puppies. Last year our additional expense was Raven’s mastitis which our breeding partner covered. This year Falken’s little excursion to the emergency vet set us back $200.

It’s a reminder to always be prepared for additional expenses whether your raising a puppy, an older dog, or a litter.

So that’s the story of Falken’s first couple weeks in this world. He’s our little fighter!

What about you guys?

Have you ever raised a litter of puppies?

If so, did you have to take one of your newborn puppies to the vet?

Tell us your experiences in the comment section below.

Do you want to read more about Raven’s second litter of puppies? Check out the first 8 weeks with our litter of English Cream Golden Retrievers. 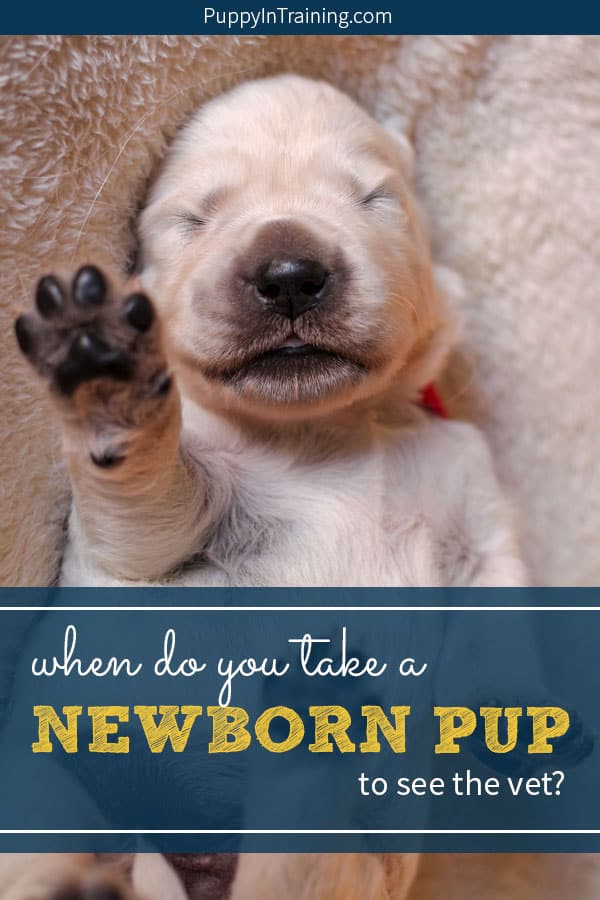 When do you take a newborn puppy to the Vet?