Personally, I rarely ride the bus, but the times I have I’ve never seen a dog on the bus. On the rare occasion one may have seen a dog riding the bus he was probably wearing a jacket/vest signifying that he was either a service or guide dog for the blind.

As a guide dog puppy raiser it’s important for our puppies to be exposed to many different sites and sounds that a regular dog doesn’t normally experience. We are given the opportunity to take our dogs to grocery stores, restaurants, and movie theaters.

This past Saturday Derby and I had the unique opportunity to experience bus riding through a special free training offered by the Orange County Transportation Authority (OCTA). Last week I wrote a short article about socializing your dog on the bus and OCTA’s free training. Here’s a short piece from OCTA’s News page:

Nerves and anxiety strike dogs just as they do humans, and the Orange County Transportation Authority (OCTA) is offering training to service animals and their handlers to help ease those reactions when riding the bus.

Many animals experience apprehension from vibrations and noise made by the bus and from the opening and closing of the bus doors, making the ride difficult for the animal and handler.

I was a little hesitant about bringing Derby to the OCTA bus ride training. I was confident that he’d be okay as he has been very good around loud garbage trucks, motorcycles, and general street noise. However, it would be his first bus ride and at just under 5 months old he was a young pup. 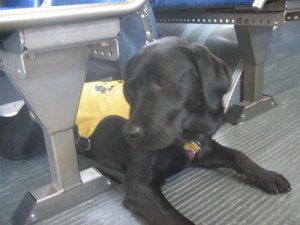 The day before the bus ride I got reassurance from our guide dog group leader and I was reminded that I always had the option of just leaving the free training if it was to stressful for Derby.

As I expected Derby had no problem with the bus ride. The only issue we had was containing his excitement to see all the other puppies in training including his brother Dutch.

The OCTA free bus ride was a wonderful experience for both Derby and I. The different smells, noises, activity, and other dogs can be very distracting and sometimes traumatizing for a young dog, but I’m proud to say that Derby did a very good job.

Our bus ride started at the Fullerton Park n’ Ride where we signed in, relieved ourselves, and got used to the sounds of hydraulic doors opening and closing, the loud screech of the breaks on the bus, and the roaring of the bus engines. I was just trying to contain Derby’s excitement as he appeared unaware of any of the sounds emitted by the bus.

We boarded the bus along with several other dogs including our pals Dutch and Lex who are both also Guide Dogs of America (GDA) puppies in training. Derby was still very excited, but remained in a “down-stay” under my seat. Our bus had several dogs from other groups including dogs from Guide Dogs for the Blind (GDB) and Guide Dogs of the Desert (GDD). 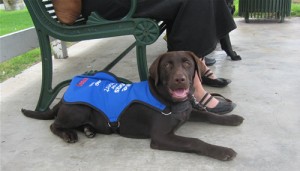 We stopped and exited the bus at Knott’s Berry Farm where Derby got to see his first chickens and roosters. After a quick chance to “get busy” we walked through a tunnel and got to meet up with two other puppies in training Virtue and Bailey (Bailey is a puppy in training with Guide Dogs of the Desert).

We had a nice little breakfast just outside the Knott’s Berry Farm park. Derby was very excited to be hanging out with other dogs and was kind enough to calm down and take a short nap when my food arrived.

After breakfast we took a few photos outside of the restaurant and prepared for practicing our heeling and some obedience training. Unfortunately for me I had to go to a wedding and left Derby with Jan and Gary who took Derby for the rest of the day.

The experience did make me realize at least one important point. Derby’s head is much smaller than Stetson’s. Stetson has that big square English Lab looking head. It was okay for me to have his collar a little loose around the neck because the collar would never slip over that big, fat head. However, Derby’s head is much smaller and at the bus stop the collar slipped over the top of his head. Lucky for me I have quick hands and quickly grabbed him. However, I just wanted to point out to everyone else to be sure your collar fits properly because if your dog slips his collar he could potentially injure himself especially in a high traffic area like a bus stop.

The OCTA free bus training was a wonderful experience and I would recommend it for any guide dog puppy raiser. We really appreciate the time OCTA took out to make this event possible for our puppies. This is definitely a training experience I look forward to participating in again next year.

There was a write up about the OCTA free dog bus training in the OC Register called Training Wheels. Our brother Dutch (Training on and OCTA Bus) also had a short post about his journey on the OCTA buses.