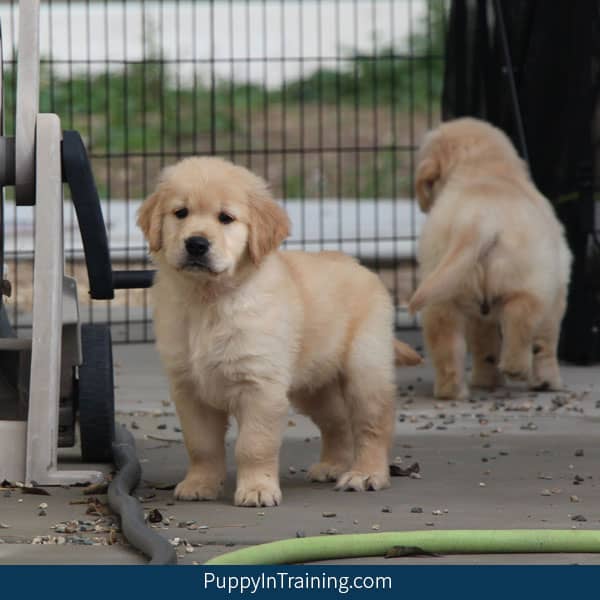 There were some big milestones during week 8 including:

Without further adieu lets get on with week 8 of Golden cuteness!

We decided to bring home a litter of stuffed Golden Retriever puppies from IKEA. That makes 12 puppies in this litter!

QUICK TIP: One thing we always do is get the scent of the litter mates on a plush toy and send it home with new owners. This way puppy’s will have a similar smell when they get to their new home. Our favorite toy for getting the scent of the litter is the Snuggle Puppy w/ heartbeat and heat pack. While it can’t replace a littermate it’s the next closest thing.

I love the little guy in the bottom right corner 🙂 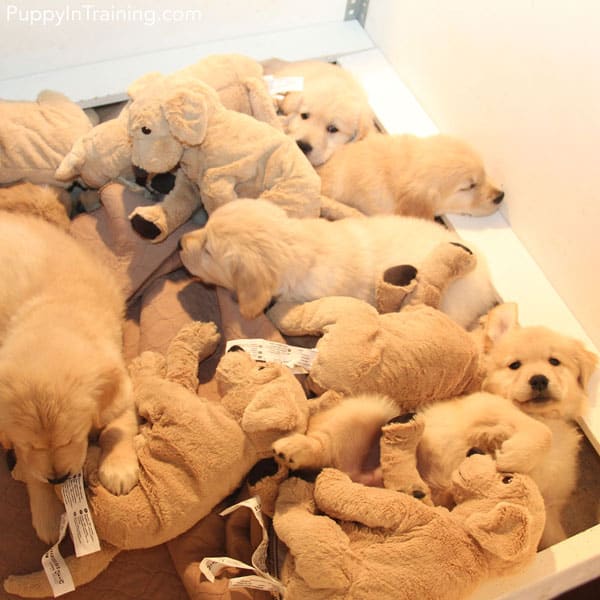 Golden puppy pile x2 – Can you tell which are real?

Everyone continues to grow at an accelerated rate.

To get an idea of how big these puppies will be when full grown, Mommy Raven weighed about 70 lbs and Daddy weighed about 90 lbs.

Half of our Golden Retriever puppies went home on day 54.

Here’s their final weight the day our 3 little guys and gal went home:

We took each puppy individually and did a rigorous (ehh, not really) test to find out which puppies would be best suited to do service dog work.

We already had a general idea of each puppy’s temperament based on observation over the past 8 weeks.

Overall there wasn’t a lot of variance between our Golden puppies on the ten temperament tests we performed.

However, there were two tests that stood out:

I mentioned we performed 10 tests, but the results of the above two ended up determining which puppies would be our next service dog puppies in training. 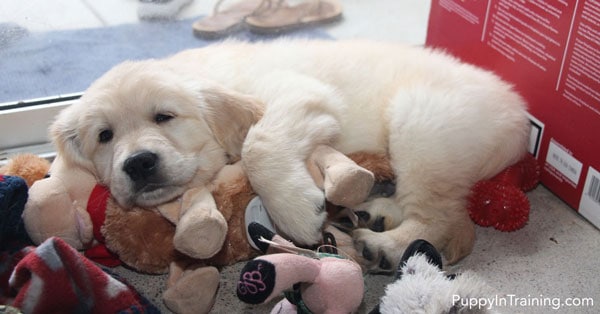 And the our next service dog puppies in training are:

1. Liberty (Berlin) – While she performed about the same as all the other pups on every other test, Liberty stood out during the Umbrella Stability Test. She was the only puppy to enthusiastically approach the Umbrella. We knew from day 1 that Liberty was a confident puppy and had a good feeling that she would have no problem with the Umbrella. She lived up to our expectation boldly and playfully engaging the umbrella.

2. Tank (Bear) – One of the larger puppies in the litter, Bear was our little cuddly buddy. He did not do well on the Umbrella Stability Test and neither did three of his siblings. However, Bear was a standout when it came to the Retrieve Test. Bear was the only puppy to run out, pick up, and bring back the crumpled up piece of paper. Not only was he the only one to do it once he did it several times! I’ve read that Guide Dog Trainers have great faith in the Retrieve Test as it shows a willingness to work for the owners.

3. Trooper (Buster) – Our smallest puppy by over 3 lbs. Trooper was our mini-mite. Even though he was the smallest he may have been the mightiest as he was the first of only 2 puppies (Liberty was the other) to climb out of the whelping box. While not exhibiting the enthusiasm of Liberty during the Umbrella Stability test Trooper had a more curious attitude towards the opened Umbrella as he approached, sniffed, and explored showing a more calm demeanor then Liberty. While Liberty showed exuberant confidence, Trooper showed a more a quiet, calm confidence and that’s what I was looking for in a potential service dog puppy in training 🙂

Patriot, Spirit, and Gunner went home with the breeder and she found them homes as loving family pets. 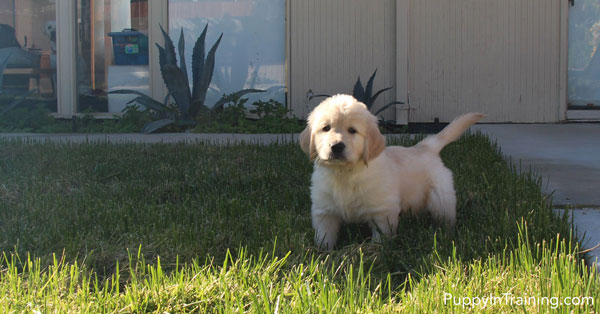 Since the beginning of this series you may have noticed I listed 2 names for some of these puppies.

After choosing our 3 service dog candidates we allowed the puppy raisers to rename the puppies with names starting with the letter “B” since these would be our “B” litter pups (Archer was our “A” litter puppy).

Read more about how we name guide/service dog puppies.

After 8 weeks with these adorable puppies they finally got to meet their puppy raisers.

Bear stayed with us while Buster and Berlin went to new homes. 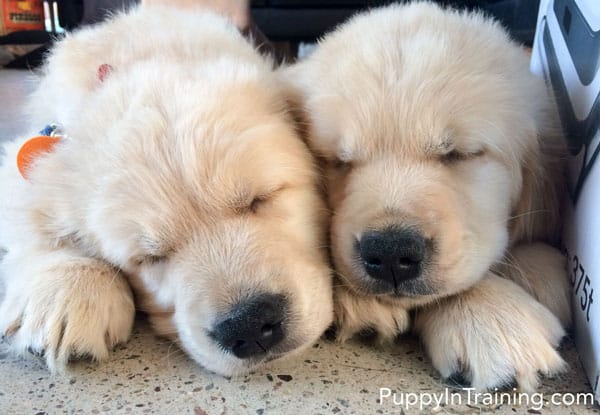 Our Golden Retriever “B” Litter – One Year Update

Where are they now?

1. Berlin – Our former first lady (she was first born), Liberty first went to a puppy raiser home until she was 16 weeks old. Unfortunately, I did not have a puppy raiser to work with her for the full 18 months. As luck would have it the breeder we partnered with for this Golden litter was looking for a female puppy as a potential breeding dog. She already knew Berlin’s lineage (obviously) and took her in as a future breeder.

2. Buster – Our former little “Trooper” went to his puppy raiser until he was 18 weeks old and after a falling out with the puppy raisers (these things happen) we decided it was best to re-home him. Again, we did not have a puppy raiser to train him and we looked to a service dog organization we volunteered with in the past. We contacted Tender Loving Canine Assistance Dogs, set up meeting to have Buster tested, and he passed with flying colors. They fell in love with Buster on the spot and adopted him into their POOCH program where he is being trained at a prison to be a service dog.

3. Koru Bear – AKA “Bear”.  AKA “Tank”. We kept our lil Bear to train as a service dog. From the beginning we knew he was a little softy, but he past the retrieval test with flying colors so we had high hopes for him.

We started taking him on outings to the book store, grocery stores, and shopping malls.

He never showed the confidence we hoped and while he would eventually adapt to places after several visits he was always hesitant in new situations.

We continued to work on building Bear’s confidence by taking him on socialization outings and enrolling him in basic obedience class.

He continued to progress and we were hopeful his confidence would grow as we exposed him to new environments and worked on his training.

At the same time an opportunity arose and we had to make a decision with Bear.

Our friends had recently lost their long-time Golden Retriever, Sugar and also tragically lost a puppy they had adopted.

If Bear wasn’t going to make it as a service dog I’d have to find a home for him.

While I didn’t want to make this decision before his first birthday I also thought this could be the perfect home for him if he wasn’t meant to be a service dog.

After discussing with my wife we decided to see if our friends were interested in adopting Bear.

They said YES! And the rest is history.

Heck, he has a huge following cheering for him every step of the way! 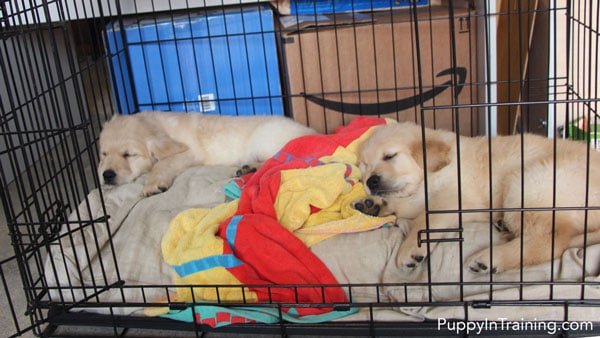 Once again, Happy Birthday to our Golden Litter!

That concludes our 8 week journey with our Golden puppies!

Just in case you missed any of the other blog posts in the series:

I hope you enjoyed our pics and insights into raising a Golden Retriever litter.

Raising a litter of puppies is a lot of fun, but also a lot of work. Definitely not for the faint at heart.

As our Golden puppies head to their new homes we wanted to give their new families a few tips by sharing one of our favorite articles on how to handle a puppy’s first night home. Best of luck to Raven’s first litter of lil’ Goldens.

If you have any questions or comments please leave us a note in the comment section below.

Are you about to bring home an 8 week old Golden Retriever puppy? If so,  Puppies for Dummies is a good starting point for learning the basics of how to raise and train a puppy. 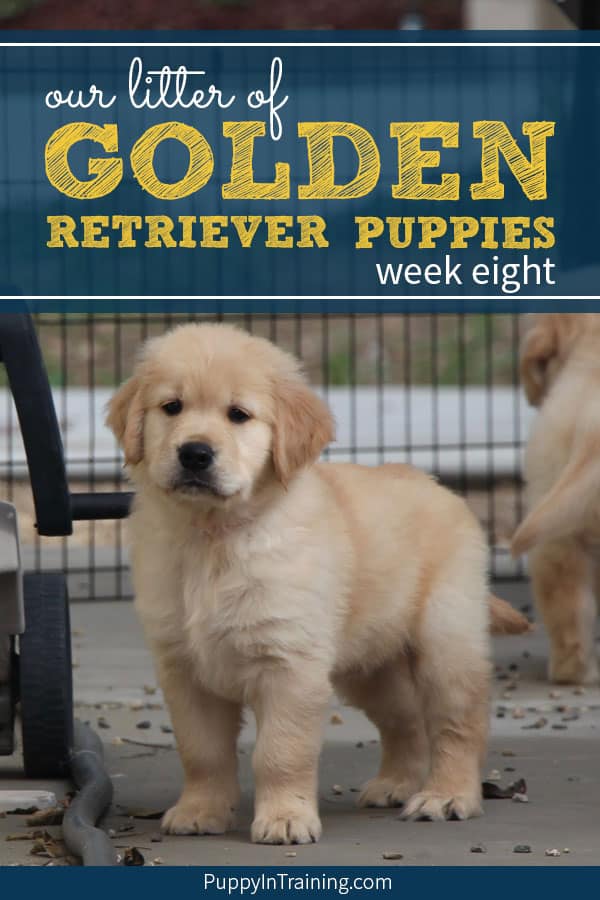