Sorry it’s been a while I took a short vacation to Colorado for a little snowboarding. While I was gone I got a few more pictures of Brindle and Black and Tan Labrador Retrievers. These images are from one of our readers who found out her dog, Ranger was a purebred Labrador Retriever after getting a DNA test done. You can see Jenny’s full comment in the comment section of our Brindle Labrador Retriever post.

Here are the pictures of Ranger along with the email I received about him: 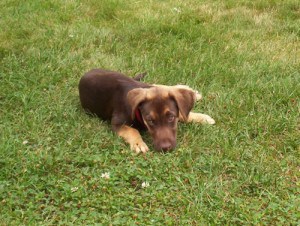 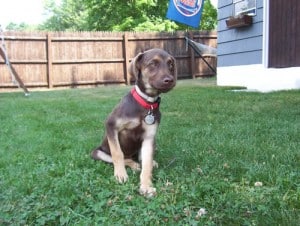 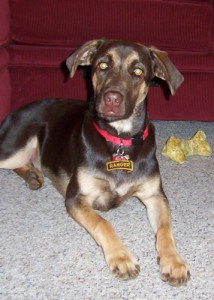 Ranger Relaxing on the Grass 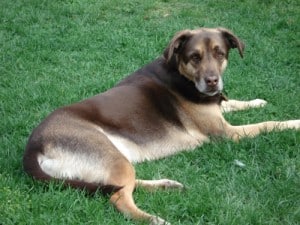 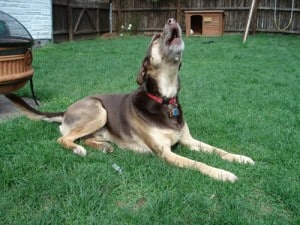 Thanks for sending me your e-mail so I can show off Ranger to everybody. Here are some pictures of him. The first two are from when we first adopted him. He was about 10-12 weeks old. The third is a few months later. The last two are from 2007, so Ranger would have been about 3 years old then. Let me tell you about Ranger. You can edit as much of this as you’d like, of course. Ranger was adopted from the North Shore Animal League here on Long Island in 2004. As soon as we laid eyes on him, we knew he was the dog for us, so we went ahead and brought him home to a somewhat bewildered pair of cats. There was no problem introducing them. Everybody got along just fine.

Ranger’s training was just about as simple an operation as any dog owner would ever want to have. He was housetrained within one week, and learned the simple commands of sit, stay, down and come within only a day or two. On the advice of, well, everybody, we tried training him with a cage, but he hated it, my husband hated it, and I hated it. I’d never trained a dog like that before and I probably won’t try it ever again. I’ll stick to what I know how to do.

When our family went up to our lake house in Pennsylvania soon after we got him, he did not hesitate one second before jumping right in and swimming out to the boat filled with my husband and boys for a day of fishing. He spent that day curled up in the boat and taking occasional dips to cool off and get a drink. He was about 15 weeks old then, but to this day he won’t let the boat leave without him.

As I mentioned, we live on Long Island, so there are plenty of squirrels to chase, and chase them he does, but not before going through a rather catlike stalking which includes a picture perfect “point” stance. In addition, my husband does hunt, and has taken him on a few hunting trips. He has done very well in the field, though hubby and I are not really sure how to train a dog for hunting. It doesn’t seem to matter that we’re incompetent, ’cause the dog does exactly what he’s told to do and doesn’t crush the game in his mouth. He is utterly unafraid of the gunshot.

Our house in not empty too often (I am a stay-at-home mom), but there has been no problem leaving him at home alone. He is not destructive in the least. But if someone IS home…Ranger will be with him. Whenever we’re around, the dog is somewhere close by and often falls asleep on your feet (like he’s doing right now while I’m typing this). He gets along wonderfully with our cats and is friendly and gregarious with other dogs and people.

That is not to say that he isn’t protective of his family. He intensely dislikes it when the boys shout at each other or fight. Should they begin a tussle, Ranger will get between them and bark. If the smoke alarm goes off (like when we’re broiling something), he barks like crazy and always gets a treat for his excellent supplementary alarm system.

All in all, he’s a great dog and we couldn’t be happier with him. This whole “what’s my dog” thing has been a lot of fun for our family, and now that we know what he is, it’s also been very interesting, too!

Hope you like the pictures of our wonderful dog. I don’t know what we’d do without him.

PS: Ranger does do one strange thing: He eats like a cat. What I mean is, when his food is put down for him, he doesn’t do what most dogs do, namely scarf the whole thing up in about two seconds. No…he eats a few bites and walks away from his bowl, coming back throughout the day to graze. When he is finished, he picks up his bowl and carries it to us for a refill. I’ve never seen this behavior in a dog before.

If you’d like to read more about Brindle and Black and Tan Labrador Retrievers check out these articles: