I’ve learned a lot about puppies, dogs, and training over the last few years and one thing that has really stuck out in my head is never chase your dog!

This bit of advice has stuck out in my head so much I’ve been having dreams about it. Last week I dreamt (is that a word?) about my guide dog puppy in training, Stetson, Walmart, and Walmart employees. For some reason Stetson was running around the store, loose and off his leash. All of the Walmart employees were chasing him trying to corral him.

Of course, Stetson thought this was a great game and continued to play keep away from all the Walmart employees. It was quite a fiasco with people sliding into displays, running into each other, and Stetson being the agile puppy (hmmm…it’s 2017 now and I’m surprised I ever described Stetson as an “agile” puppy) narrowly escaping everyone’s grasp. Quite simply it was like watching the three stooges.

Why You Should Not Chase Your Dog

Did you learn a lesson from my dream? The moral of the story was do not chase your dog! Why? because he thinks it’s a game. If you chase, he runs away. I’m sorry to say that most likely he’s quicker than you. I’ve seen it many times at the park or on residential streets…people frantically chasing their dogs while the dog simply moves gracefully and speedily out of the grasp of their owners. So, what should you do to get your dog to come to you? Don’t chase them like the picture below! 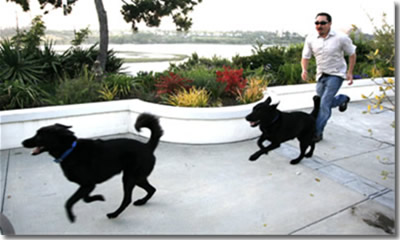 To quote Monty Python and the Holy Grail…RUN AWAY! RUN AWAY! RUN AWAY! That’s right. If you want your dog to come to you run away from him. Once again he’ll think it’s a game, but now it’s his turn to chase you. Take a look at the picture below. Linus and Stetson have me in their sights and it’s only a matter of seconds before they’ve caught up to me. 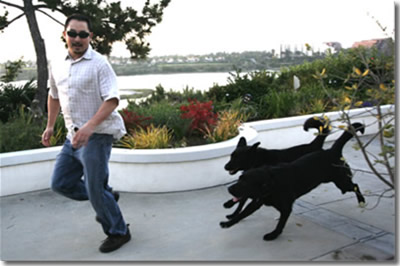 UPDATE: Nearly 9 years after first writing this article I still find this all true.  When my 5 year old niece comes to visit she’s a little hesitant with the dogs.  I get it, they’re twice her size, but I always warn her not to run from them because they will start chasing her.  From time to time she will run and Linus, Raven, Archer, and even Stetson will inevitably start playing the chase game.

On a second note.  Archer has learned how fun the chase game is to play (Linus taught him the game in our backyard) and anytime we let him into the backyard he tries to initiate the chase game (he likes to be chased) which I hate to say has really hurt his recall.