Here’s the question she sent me this morning: 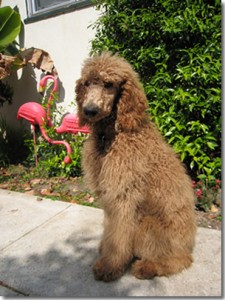 Hope you are well. I got a new puppy and need some advice. My puppy is 5 months, a Standard poodle, very chill and mellow & already potty trained. I just got him on Saturday and so far he has been with people everyday, he follows me where ever I go. He barks when I leave him for only a few minutes so I think he has separation anxiety. I got a crate yesterday and would like to begin the crate training with Monty. I know it is normal for a new puppy in a new environment to have some sadness about being left alone, but eventually he needs to be alone at home. Do you have any suggestions? I have been researching and reading, most people say to slowly leave him in the crate, a few minutes at a time, until he feels comfortable being left alone.

It’s good to hear from you. Monty looks like very handsome puppy…it looks like you’re going to have fun with his coat.

The ideas on crate training you mentioned sound good to me. Here’s some of my experiences with Stetson and Linus:

Stetson and Linus were both awful with the crate. They cried, whined, howled, barked, and moaned everytime I put them in his crate. Here are a few pointers:

Stetson didn’t let me sleep for about 5 weeks, but now he makes absolutely no noise in his crate. One of the most important things is to stay consistent. Don’t let him out unless he’s being calm and quiet (sometimes not too easy to do). Practice putting him in his crate when you’re at home…wait till he stops barking then let him out (not as easy as it sounds…Linus barked for about 3 hours straight before I caught him not barking for about 10 seconds).

Hopefully he gets used to the crate in a hurry, but as I said it took both my dogs about 5 weeks before they got comfortable with the crate.

If anyone else has suggestions for crate training please leave your suggestions in the comments area.